Maybe you have this art of a dozing doxie already. “Sleeping Dog – The Dachshund” was after all, your most popular of all my dog drawings last year. 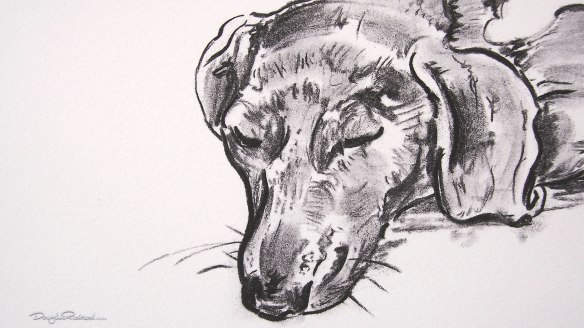 And this art has helped raise money for doxies too. Here’s what Laura from Massachusetts wrote me: “I just wanted to send a note to let you know we had a really nice event turnout and we were able to do this great fundraiser for Coast to Coast Dachshund Rescue. Your print of the sleeping dachshund was a hit and it generated a little bit of a bidding war in our silent auction. I myself love the print too because it really looks like the things our little dachshunds probably are dreaming of, when their little legs are twitching and they are barking in their sleep.”

So why not go ahead and join the other doxie owners and admirers who are displaying this really popular drawing in their home. You don’t even have to own a dachshund to be able to enjoy it.

If you own my art of the sleeping French Bulldog as well, what a comfortable atmosphere both of them could start to produce. Did you know this dachshund drawing is available as a doxie throw pillow as well (along with other dachshund products), have you checked that out yet? How perfect would that be for the bedroom, or even better for around your dachshund bed themselves, hilarious or what? 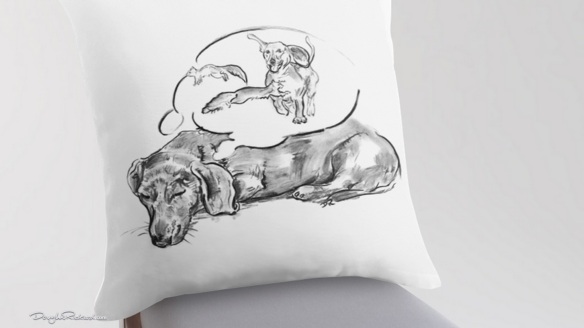 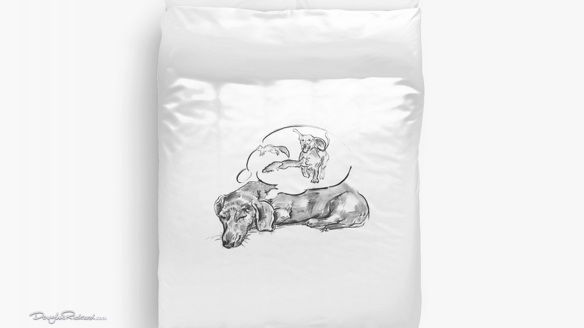 Dachshund feet may be little, but they run fast, sometimes even in their sleep, but what is it that Doxies are dreaming about in those Wiener dreams?

Even if it rains this summer, there’re delicious cakes and drinks inside Chorak 122-122A High Rd, East Finchley, London N2 9ED. Even my pink dog art looks scrumptious!

“It Sparkles – Summer ‘12 – Douglas Rickard Exhibition” starts today and runs through June 29th 2012. Would you like a cherry with your raspberry Dachshund? Visit the Facebook Event Page!

What would a pink Dachshund art print displayed in your home, say about you and your Dachsie? Artist, Douglas Rickard thinks he knows…