The heat is rising and it’s time for tees. Here are three hot, pertinent and unusual up and coming best sellers from my Redbubble shop I’d love to draw your attention to! 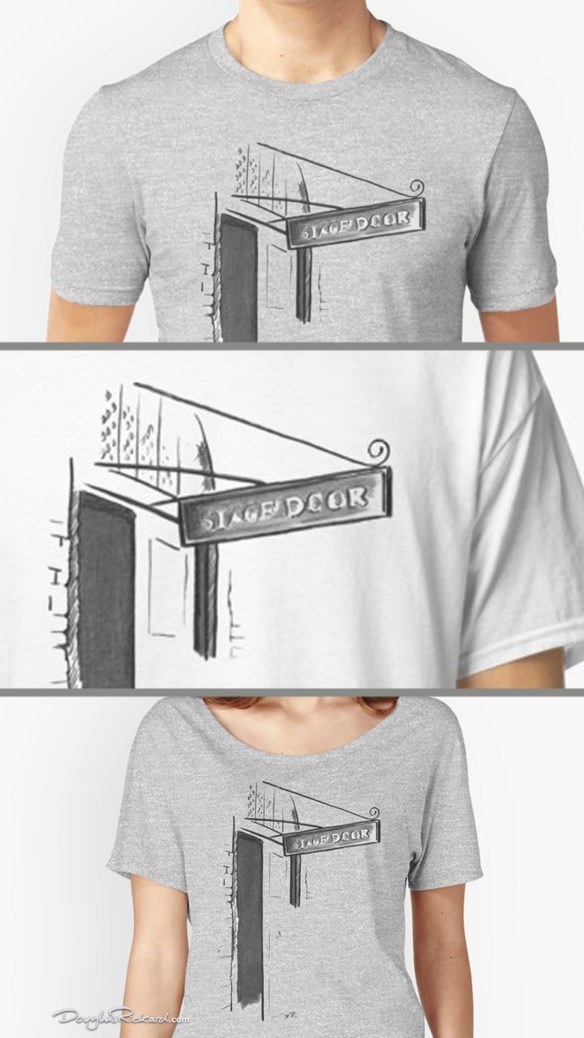 My most popular “Stage Door London” shirts are those from the back view of the Theatre Royal Drury Lane. Shown in Slim Fit Unisex | Classic | and Women’s Relaxed Fit.

My dog art’s simple line drawings make for a strong t-shirt design. How your Samoyed side in Slim Fit Unisex | Classic | and Women’s Relaxed Fit! 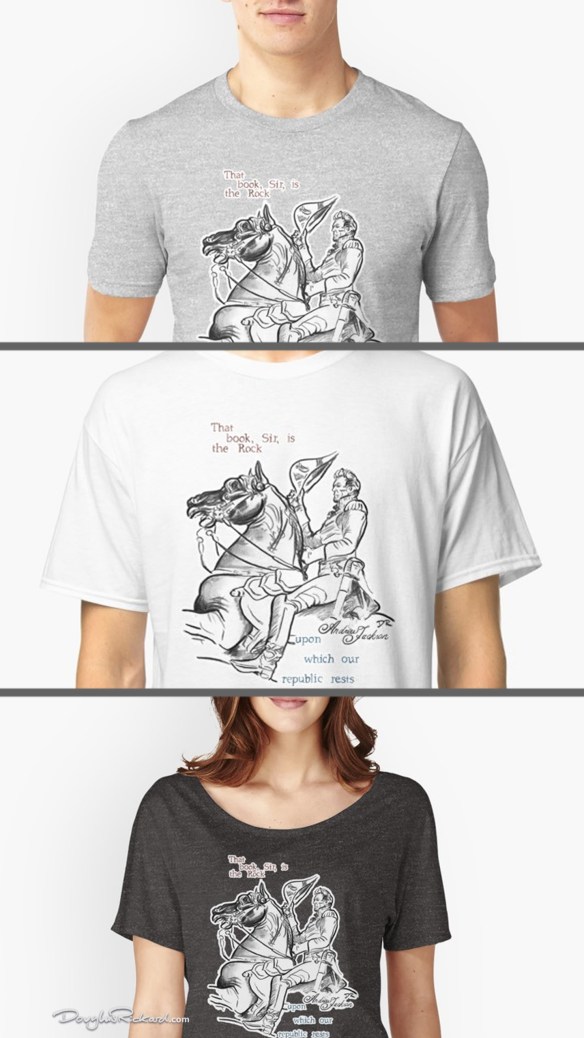 And if you’re really woke to what’s going on in the Great Awakening and enjoy history, you could honor Andrew Jackson’s presidential quote through all the summer in Slim Fit Unisex | Classic | and Women’s Relaxed Fit too.

My latest charcoal theatre drawing in the “Stage Door London” series, is a principally utilitarian looking set of doors and they open onto a principally everyday West End back street in Soho. What caught my attention though, is what appears in gold lettering above them.

The inscription on this carved tablet which I have drawn in charcoal, serve not only as an acknowledgement to “the world’s greatest artists,” but a promise.

Maybe you already own my “Theatre Royal Drury Lane” and “Lyceum Theatre” releases and would like this to make a solid set of three. Or perhaps this art, which is also available on theatre gifts and accessories will serve as a private recognition for your world’s very own greatest artist.

Have you ever meandered through the side streets of Covent Garden? These crisscrossing rows of London streets will take you past, what I find to be, fascinating back doors of West End theatres… stage doors of course. I wanted to draw one of London’s theatres, and held back from drawing the front. I thought the unassuming stage door in down-to-earth charcoal, could be an equally exciting piece of showbiz art as a colorful oil pastel of the opulent building front. 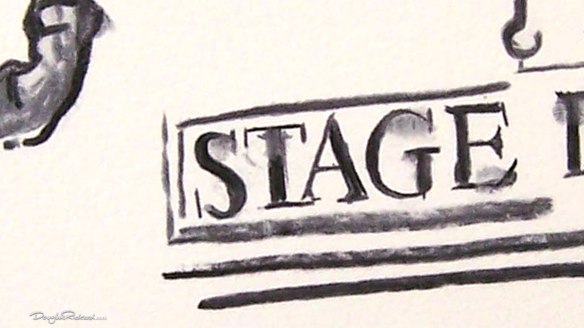 Whenever I have walked past a stage door, and I don’t know if you’re the same, I always take a look at anyone going in or coming out. I’m actually a little in awe of the talent and creativity that goes into the choreography, musical scores and performances I’ve seen in the West End. And I enjoy the idea of how actors for example, appear out of the city in their everyday clothes and slip into these stage doors and the vast, dark auditoriums beyond to come together and perform under the bright lights and whisk us away to another place. I hope my simple Lyceum Theatre drawing somehow captures a little piece of that wonder of London’s West End.

The wet British weather mirrored that of the River Pageant yesterday in Battersea Park. But I had to make a return trip to see David Hockney’s Brushes App painting which had been added to the “Artists of the River Pageant” at the Pump House Gallery.

The prestige of my drawing of the Jubilee, being on display in the same exhibition as this expressionist pioneer of Pop Art had me taken aback all week!  Heightened color, an enthusiasm of mine, emanates from David Hockney’s iPad paintings, not even so much of sunny Californian Yosemite, but of East Yorkshire; that’s when you know an artist really ‘sees’ into another realm.

My charcoal and oil pastel art of the Queen at the pageant ironically has little color this time. But I feel I heightened instead, what I call ‘light energy’.  On that dreary day, in his style, David Hockney squeezed out all those colorful protons and neutrons, so much so, that the Queen’s white, crystal studded coat appears as gold.

Some may think it is déclassé for me to say this, but I make no apologies for enjoying Disney, so when I first saw David Hockney’s vintage cartoon-looking Tower Bridge in “The End Of The Regatta,” the color styling of Walt Peregoy in 1961’s “One Hundred and One Dalmatians” came to mind. And that’s not an indictment against David Hockney’s work either, I believe art should ‘bless’ and deliver ‘happiness’ to the observer. And speaking of being happy, my Hand Embellished art print on display has been sold to a lady who lives on the Thames! The exhibition runs until Sunday September 15th 2013. 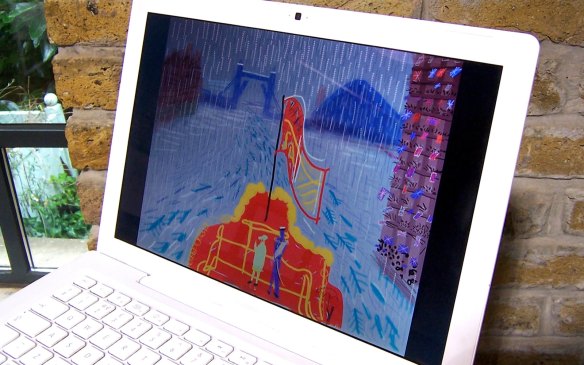 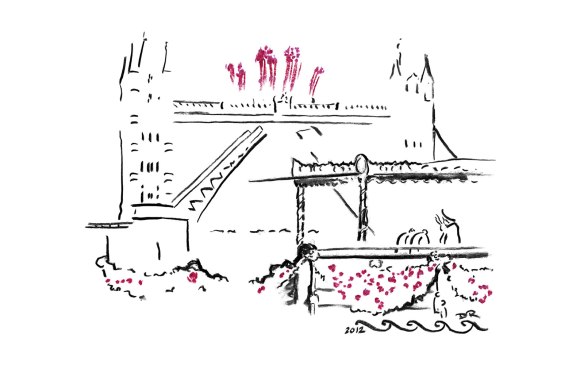 Navigate your way to the top of a Victorian tower in Battersea Park by September 15th and you’ll find my “Diamond Jubilee” art on display.

You’ll also discover a table full of teapots, crockery and bottles which pay homage to the Queen’s flotilla from the Turner’s House Artist in Residence, with whom I got to speak (below). So why not get underway to the Pump House Gallery for this Thames Festival free art exhibit, or if you’re high and dry see what was in the offing by way of my video from the Private View which was opened by Lord Salisbury!

My drawing of the Queen on her barge will be one tiny part of a river-wide, ten-day celebration of the Thames, in London this September, which includes races, markets, and even unique opportunities to “Get on the River,” yourself. And although it sounds like part of a Disney movie, there will actually be a live operatic concerto “sung” by ships and boats, including a little tug between Tower Bridge and London Bridge on Saturday the 14th.

My work will be exhibited in Battersea Park , which is right up against one of the Thames’ little beaches; with “over fifty works of art inspired by The Thames Diamond Jubilee Pageant,” at the Pump House Gallery, London SW11, each day from Wednesday the 4th to Sunday September 15th 2013, between 11.00am to 5.00pm.

Why draw or paint a picture when we have photographs? Because some artists can pull out something more from a subject they’re drawing, energy perhaps; that a photograph doesn’t always convey.

That’s one reason I add more color than the natural eye sees, in my drawings. In this video, I talk with another artist and look at her paintings, and describe the new role I believe, artists have, in the century we are living in.

My “It Sparkles” art exhibit was just the ticket for us in North London back in the summer!

Here’s my video report of how, I felt, the art prints of my pink dog drawings and landscapes permeated with heightened color really did let the ‘light’ in. Just imagine how well this art does its job throughout the winter!

I’ve replenished my “It Sparkles” Summer ’12 Art Exhibition, which got an extension by a whole month through to July 31st, with nearly 50 percent new art prints. It’s at Chorak 122-122A High Rd, East Finchley, London N2 9ED. Look out for a whole row of sparkling picture quotes to take home.

One tiny figure of the Queen surrounded by all that maritime pomp and ceremony. In this series of cityscapes, I’m telling stories of London occasions like the Royal Wedding, so how could I make the Queen the centre of this ‘story’ on her Thames barge, that Jubilee day? Even though I’ve drawn Tower Bridge in detail before, I had to lessen its appearance in this artwork, so that she and the barge would not get upstaged.  I feel it actually really works in that it looks like it’s emerging out of the driving, London rain that afternoon. I did enlarge the opening bascules though, in order to help tell what was happening.

To this minimalist charcoal art I added color for the garlands of roses, peonies and carnations on the Royal barge, in the shape of rolling waves. See how the iridescent, “red gold,” real oil pastel touches shine in the 13” x 9.5” Hand Embellished version, a Numbered Limited Edition of six, along also with the 13” x 9.5” and 19” x 13” versions. So if you’d like one, don’t leave it too late and miss the barge, will you! 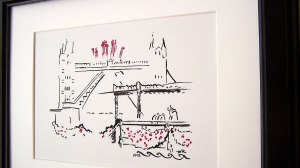 On a rainy Queen’s Jubilee weekend, the cheerful color of fireworks in the London sky, atop a just-visible Tower Bridge.

Douglas Rickard
Create a free website or blog at WordPress.com.